Glacier National Park – you’d think it’d be all about glaciers, wouldn’t you?  I certainly did, and hoped to see some during our recent 10-day visit.  It wouldn’t be the first time I’d experience a ‘persistent body of ice, at least 25 acres in size, that forms where snow accumulation exceeds its ablation (melting and sublimation) and that moves in response to temperature and precipitation.’  (I give you the definition so you don’t confuse a glacier with a snowfield).  I’d seen and touched glaciers in several other continents (South America, Oceania and Europe), but never in my own.  So, given the name of the park, I figured that I’d get a chance nearer to home.

Sadly, though, I only saw a few white patches way off in the distance that I was told were glaciers – as opposed to the many snow fields that dot mountain tops throughout the park.  The unfortunate truth is that of the 150 glaciers that existed in the park in the early 1900s, only 25 remain.  And, according to recent analyses, they’ll all be gone by 2020.  Pretty scary, I’d say.  For some clear visuals of what’s happening, check out the USGS webpage about the park and the Repeat Photography Project.

In spite of these losses, the northern Rocky Mountains are gorgeous.  And, Eileen and I thoroughly enjoyed exploring the world’s first International Peace Park, composed of Glacier National Park in Montana and Waterton Lakes National Park in Alberta.  As a World Heritage Site of about 1400 square miles, it’s a land of pointy peaks (including glacial horns and aretes); cool blue lakes, swiftly moving streams, aspen and coniferous forests, and wildflowers galore.  The U-shaped valleys, steep canyon walls, and numerous lakes are stunning testimony to its glacier-fashioned history. 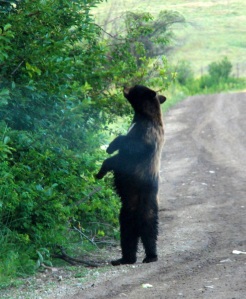 So, if Glacier (and Waterton) isn’t so much about glaciers these days, what is it about?  According to the National Park Service, it seems to about bears.  Whenever you go to a ranger talk (we went to three), no matter the topic, the program starts with warnings about black and grizzly bears.  They tell you what to do if you see one on or near your path:  Let the bear know that you’re around by talking loudly (bells don’t work).  If you see one nearby, don’t establish eye contact; instead, act small and reticent.  And, if it seems that you’re going to be attacked, use bear spray – which, they remind you, is not like insect repellent.  You don’t spray it on yourself, as one of the rangers did accidentally.  She felt like she was on fire for at least 1/2 hour.

With our heads full of warnings and instructions, Eileen and I set out on many a park trail, looking for wildlife.  And, we succeeded.  First (of course!) were the bears – no grizzlies, but five black bears (three of which were brown).  From only 50 feet away, we giddily watched a teenage (I’m guessing here) bear munching on Saskatoon berries (otherwise known as serviceberries), standing up on two feet to reach higher branches, and then wander into a pond, swim around and grab aquatic vegetation with his paw and shove it into his mouth.  Fortunately, throughout the encounter we were safe and sound in the confines of our car.  And, a mere 200 meters (they use the metric system in Canada, you know) from the Prince of Wales Hotel in Waterton, we watched two bears doing their thing – the male/female thing, the humping thing…

Trail to Iceberg Lake with bear grass
(photo by Eileen)

And, we saw mountain goats, all woolly and white.  One even ran right by me, in a hurry to….  Well….  Maybe he had a female ready and waiting nearby.  Speaking of which, we also came across many hoary marmots, sitting on rocks above tree line, unafraid of humans.  As the largest of the ground squirrels, they’re known as whistlers, with at least seven different calls.  No less quiet were the Columbian ground squirrels that monopolize grassy lawns around campgrounds and hotels throughout the park.  One minute they’re sitting up on hind legs like dogs begging and the next they’ve burrowed into one of the holes pockmarking their habitat.

Speaking of common critters, white-tailed deer abound in the forests, woodsy roadsides, and even the playground of the Waterton “townsite” (as it’s lovingly called).  In an attempt to control them, the park service has hired six border collies, along with their handler, to scare them away from the swings and slides early each morning.  From the looks of it, a dozen pit bulls might function better…  Or, maybe the moose that we spied in a shrubby, flower-filled field.

That brings us to plants, and to the wildflowers which were quite spectacular.  Mid-July is peak blooming, and we must have seen several hundred species ranging from the ubiquitous (at higher altitudes) bear grass to yellow glacier lilies, dainty orchids, white and pink spireas, tall water parsnips, and purple wild bergamot.  Our last hike to Iceberg Lake was the most prolific.  And, it’s a hike that I’d highly recommend to all – 5 miles (one way) on a very gentle uphill slope through spruce and fir forests, past an impressive waterfall, through open fields of flowers, to an icy (yes, it was mostly still covered with ice) lake situated in a semi-circular valley surrounded by steep rocky walls and craggy peaks.  My only regret was that, contrary to custom, not one of the many hikers was brave enough to plunge into the frigid water.  Same for me.  As much I enjoyed swimming in the cold waters of three of the park’s lakes, I doubt my skinny body would have survived the shock of this one.

Speaking of comfort, other notable features of Glacier-Waterton are the four large hotels, built in the 1910s and 1920s by the Great Northern Railway to make the parks more accessible to early visitors.  They are grand rustic-looking structures, perfectly situated on lakes with stunning mountain views (or in one case, in easy proximity to the railroad station).  We visited all of them, stark contrasts to our humble green tent and campsite bathrooms without showers or warm water.   While all have large wood-lined atria, each has a distinct style:  one is modeled on a Swiss chalet and another has a lobby full of 600+ year-old Douglas fir timbers.  While we didn’t test out any beds Goldilocks style, we did appreciate the amenities:  clean bathrooms, a good meal, and best of all, the huckleberry soft-serve ice cream (hits the spot after a long hike!).

Crossing the Waterton River on horseback

And, then there are the various modes of transport available to visitors.  While we didn’t take any tour boat rides across the lakes, we paddled on our own power, renting a kayak one evening.  And, we used the park shuttle van that takes visitors on the famous and scenic Going-to-the-Sun Road (still under reconstruction, so sometimes slow-going).  By letting someone else (usually a retired, seasonal worker) drive, it lets visitors see the views and avoid driving off the cliff just inches from the edge of the road.  Best of all were our horses.  One day we rented horses and a good-looking cowboy to take us across the prairies and up into the hills.  Sitting high, we could fully appreciate the surroundings, and because we’d been given tall horses (PJ and Tugger), we succeeded in making the first river crossing of the season.  Wet pant legs in hot weather were a welcome price to pay. 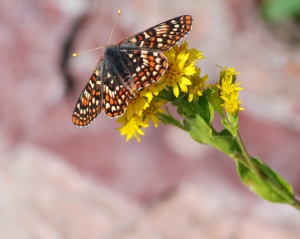 Butterfly on flower (photo by Eileen)

Enough said for now.  I hope to have tempted you to visit the parks, whether or not there are glaciers to be found.

Stay tuned for Part 2, in which we visit surrounding areas in Montana and Alberta to visit a landslide and an animal slide (i.e., buffalo jump), go paddle boarding, and shoot bb guns!

I'm a lucky person since I've combined my two major passions, conservation and travel, into a profession of sorts. When I'm not organizing or leading an ecotour to Latin America or beyond, I engage in freelance writing and enjoy outdoor activities with my wife. That's the nutshell version!
View all posts by abitravel →
This entry was posted in Nature, Travel and tagged bears, Glacier National Park, glaciers, horseback riding, rustic lodges, waterton lakes national park, wildflowers. Bookmark the permalink.