Gay Honeymooners Are Welcomed Across America 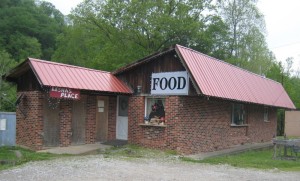 The day after our wedding, my Prius sat parked on the street in front of my house, sporting a “Just Married” sticker on the window and a bevy of pink and white balloons filling up the inside.  I wondered what the neighbors – who certainly know that Eileen and I both live in the same house, but haven’t been told much more than that – would think.  I assumed it was a final confirmation of their rumors – yes, those two are lesbians, indeed.

I figured that the neighbors would be okay with it.  After all they’ve observed us over the years and know we’re not baby snatchers, child molesters or other such unimaginable thing.  But, what about perfect strangers in the middle of the U.S. – in West Virginia, Kentucky, Arkansas, Kansas and Texas?  What would they think when they saw two women with a “Just Married” sticker on their car?  That was a question that Eileen feared the answer of, and the one I wanted to test.

So, two days after our wedding, we packed the car with clothing for 3.5 weeks, sleeping bags, tent, yoga mats and bicycles (after removing all those balloons first, of course), and took off on our honeymoon road trip to New Mexico.  We left the “Just Married” sticker on the rear side window as proof that we had something to celebrate.   As we loaded the car, I expected Eileen – who’s uneasy about displaying our relationship in public  – to express concern about it, but she didn’t utter a word.

Our first stop was lunch in central West Virginia.  I had wanted to eat in Duck, which I noted on our state map – you know, duck into Duck for a quick lunch – but it was so small that there wasn’t a commercial establishment to be found.  Nearby Ivydale had one restaurant with a small sign that said “Lesha’s Place” and a much larger one that just said, “Food.”  No cars were parked out front, but that was okay.  We were hungry, and were undeterred by the ceramic toadstools and decal saying “Friends of Coal” in the window.  Luckily, there was also a varnished piece of wood painted with the words “Everyone Welcome.”

As expected, we were the only ones inside – except for the woman serving from behind the kitchen counter.  On her recommendation, we ordered the special of the day – taco salad, which turned out to be a bowl of cold beans and meat with nearly invisible traces of iceberg lettuce mixed in.  We chatted with her, and she told us that she had recently married her live-in boyfriend of many years, and that they had gone away for a weekend to celebrate.  Kind of like us, I thought, so I ventured to announce that we were on the first day of a road trip to New Mexico. And, that we were on our honeymoon.  I glanced over at Eileen, who started to turn white.

After all, we were in the middle of conservative coal mining country, in a rustic eatery where the usual customers were coal miners in their overalls.  How could they look favorably on two microfiber-clad women (with yoga mats in their car) who had just married each other??  To our surprise, our hostess looked at us with a big smile and offered hearty congratulations.  When I tried to give her a tip, she returned it and insisted that we take cookies instead.  “No, I want you to have those cookies as a wedding present.   It’s my gift to you.”  We had expected to encounter a confounded expression, at best, or the nose of her husband’s shot gun, at worst.   Instead, we got a handful of homemade chocolate chip cookies.

Next, we drove to Kentucky, where we spent the night in Frankfurt, the state capital.  After visiting the 34-foot wide floral clock and the restored downtown, we had dinner at Serafini’s, across the street from the Old Capitol Building.  As we were now in bourbon country, it was easy to decide what to drink.   And, before you knew it, I started telling our overly friendly waiter that we were on the first night of our honeymoon.  Eileen cringed, but the response came back quickly and cheerfully, “Congratulations!”  The next morning, as we shopped in an all-Kentucky-made crafts store, I casually told the saleswoman that we had just been married.  She, too, was pleased, informing us that Frankfort had an openly gay mayor, and then giving us two locally-made chocolate bars.

Twenty four hours into our trip, we were batting three for three.  Each stranger to whom we announced our marriage seemed as jubilant as we were.  Okay, I thought, let’s look at this as a challenge.  I’ll just keep telling people, and we’ll see when and where we get pullback.   Sooner or later, someone is bound to turn away, frown, or chase us out of their presence.   So, as we continued along our way – through Arkansas, Texas and New Mexico and then back through Kansas, Missouri, Ohio and Pennsylvania – I informed those we ran into about our new status as wife and wife.  Invariably, we were received with happiness.  Sometimes there were questions about how and where we could marry legally, but usually it was just shared joy in the confirmation of our love.

Even the three church ladies, recently widowed, from Dallas were okay with it.  We sat with them and six other travelers at the communal dining table at Café Pasqual’s in Santa Fe, and as we waited for our breakfasts, we went around the table recounting our travels and where we were from.  As the last to report in, I was ready for kickback from the three graying matrons who had befriended each other at their church and were on a four-day visit to the art museums of Santa Fe.  But I was bold, and proceeded to tell the truth of why we were on our road trip.  “Congratulations!” came the responses from around the table.  And then one of the churchgoers pointed to her friend and said, “Her son is gay.”  That made everything all right, albeit not optimal, in their book.

Our final declaration of marriage during our honeymoon came on our last day, a Saturday afternoon in western Pennsylvania.  We had just finished riding our bicycles on the Allegheny Passage Rail Trail, and were lounging on a bench, procrastinating the final leg of driving home.  A middle-aged couple with two well-groomed poodles strolled by and we soon engaged them in conversation.  They were from West Virginia and were visiting the Meyersdale area for the first time.  When told them we were on our way home from a 24-day road trip, the man turned to us and asked, “How did you get your hubbies to let you leave for so long?”

“There are no hubbies,” I responded.  “Only wives.  We just got married and are on our honeymoon.”   They weren’t quite sure what to say, but the wife recovered quickly.   “That’s nice,” she muttered, and then changed the subject.  Minutes later, however, and out of context by that point, the husband said, “Congratulations on your marriage.”  The reality of it had sunk in (it was 2011, after all) and he was okay with it.  He wanted us to know that he was on board with the new world order.  And, off they went, with heightened awareness, and poodles in tow.

Our conclusion?  Most of us Americans, no matter where we’re from, have the same basic wishes – to find love, to be happy, and to see others happy.  When we meet people who have achieved these desires, we applaud them.  And in doing so, we share our humanity and feel uplifted by it.

I'm a lucky person since I've combined my two major passions, conservation and travel, into a profession of sorts. When I'm not organizing or leading an ecotour to Latin America or beyond, I engage in freelance writing and enjoy outdoor activities with my wife. That's the nutshell version!
View all posts by abitravel →
This entry was posted in Same-sex wedding, Travel and tagged gay honeymooners, honeymoon, Just Married sign, road trip. Bookmark the permalink.