The Engagement: Getting Over the Mountain 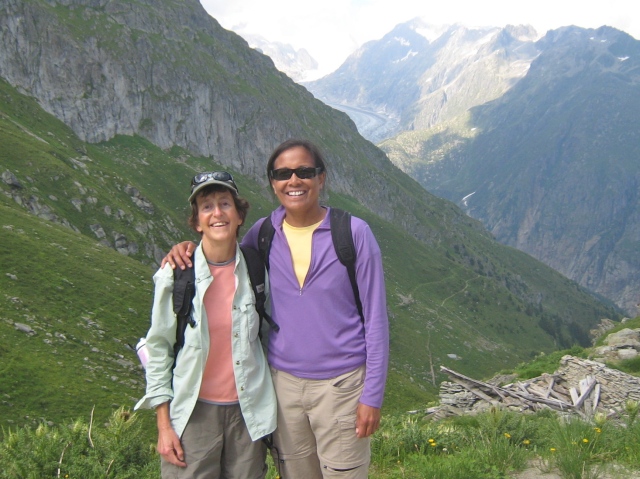 Abi and Eileen in the Swiss Alps, minutes after we became engaged

I’ve promised to blog about our same-sex wedding and some of the planning involved.  But, before I get there, I’m going to tell you about our engagement.   Which, I would say, took a long time in coming.  I know this sounds a bit conventional, if you’re looking at it from my side of the relationship.   That is, it sounds like I’m the traditional woman, waiting for my boyfriend to get down on his knees and ask that question that every woman waits for, the question that will change my life forever.

Okay, okay, maybe I’m overdoing it a bit, getting wrapped up in the fairy tale.  But one of the main reasons for this blog is to belie the typical gender stereotypes so often present in relationships and marriages.  And, I want to demonstrate how a same-sex couple can have a perfectly good and “normal” marriage.  For me, the best way to do this is through illustration – that is, through telling our story which, although particular to us, can serve as an example for other same-sex, or heterosexual couples.

So, back to the wedding proposal that I was waiting for Eileen to make.  Why so?  Well, because very early on in our relationship, we had made an agreement:  if she would propose to me, I would plan the wedding.   It seemed like an equitable way to divide up the roles and responsibilities of getting married, and I knew that she isn’t a fan of planning social events.

I liked our arrangement because I do enjoy event planning – I’m a tour organizer –  and because I knew that Eileen would eventually get around to it.  After all, it was she who first brought up the idea of getting married, just weeks after we became a “couple.”  She was eager for us to make a formal commitment to each other, though the idea of a “real wedding” with lots of people and celebration was not on her initial agenda.   She’s not one for big gatherings, which also explains why she’s not into the planning of them.

Gradually, and with the help of friends, we convinced her that a “real” wedding – in essence, a fairly typical wedding – could be fun and meaningful, in spite of all the work involved.  You could say that I got the raw end of the deal, as it takes a lot more time and effort to plan a wedding than to ask a simple question.  But, I was happy with our arrangement.  Aside from the fact that I like planning, having her initiate the process meant that we wouldn’t get married until she was ready for it.  No pushy wife here.  I, on the other hand, could have been ready any time.  I love Eileen and I love parties.  And, when it’s your own party you have control over who’s there and what happens.  Or should I say, you think you have control over those things?

Anyway, back to the engagement.  One of the things that was holding Eileen up was her concern about how to propose.  She felt like she had to create some sort of romantic set-up like they do in the movies, or like stories you hear from excited brides-to-be.  I assured her that it wasn’t necessary, but those societal expectations can die hard.  And I’ll admit that I, too, wanted something more than a lazy “Will you marry me?” while we were lazing in bed on an ordinary weeknight.

The moment came while we were hiking in the Alps during our trip to Switzerland, where we enjoyed exceptional hiking, biking and swimming opportunities.  We had just seen and touched one of Europe’s largest glaciers, the Aletsch Glacier, which is, sadly, melting away,  just as other glaciers around the world.  Eileen asked me how I was feeling, and I said “Great.  This might be the best day of our trip.”  She screwed up her courage and said, “I have a question for you.”  Even though it was out of context, I knew where she was going with that statement.  I had had an inkling that she’d propose when we were away, doing everything together and bonding in a way that’s more intense than in our every day home lives.

We were all alone on the trail, after creeping through a dimly-lit half-mile tunnel through the mountain, now out in the open with views of snow-capped mountains and wildflower-filled valleys.   Really, a sublime setting.  Eileen directed me to sit on a rock and then, without further ado, asked me if I would marry her.  Of course, I knew that my answer would be affirmative, but I wanted to draw the moment out.  After all, it was a seminal question and it seemed to come up suddenly and spontaneously.  So, I responded, “Let me think about it.  I’ll tell you when that cloud over there clears off the mountain peak.”  I guess I didn’t want to have been accused of cloudy decision-making…

I realized afterwards that my hesitation had caused her some momentary worry, making her feel like she had taken a risk that might result in rejection.  Not at all what I had in mind.  But once I said yes, and repeated it with forcefulness and excitement, the deed was done.  We were going to be married!

Not only did her question add to the wonderfulness of any already spectacular day, but it made our Switzerland trip all that more memorable.  Plus, it started the ball rolling towards the excitement of planning the wedding – which, by the way, Eileen participated in to a great extent.  And as a result of the great extent of our mutual planning efforts, we had a really great wedding.  Stay tuned for more.

I'm a lucky person since I've combined my two major passions, conservation and travel, into a profession of sorts. When I'm not organizing or leading an ecotour to Latin America or beyond, I engage in freelance writing and enjoy outdoor activities with my wife. That's the nutshell version!
View all posts by abitravel →
This entry was posted in Same-sex wedding, Travel and tagged getting engaged, same-sex marriage, Switzerland. Bookmark the permalink.